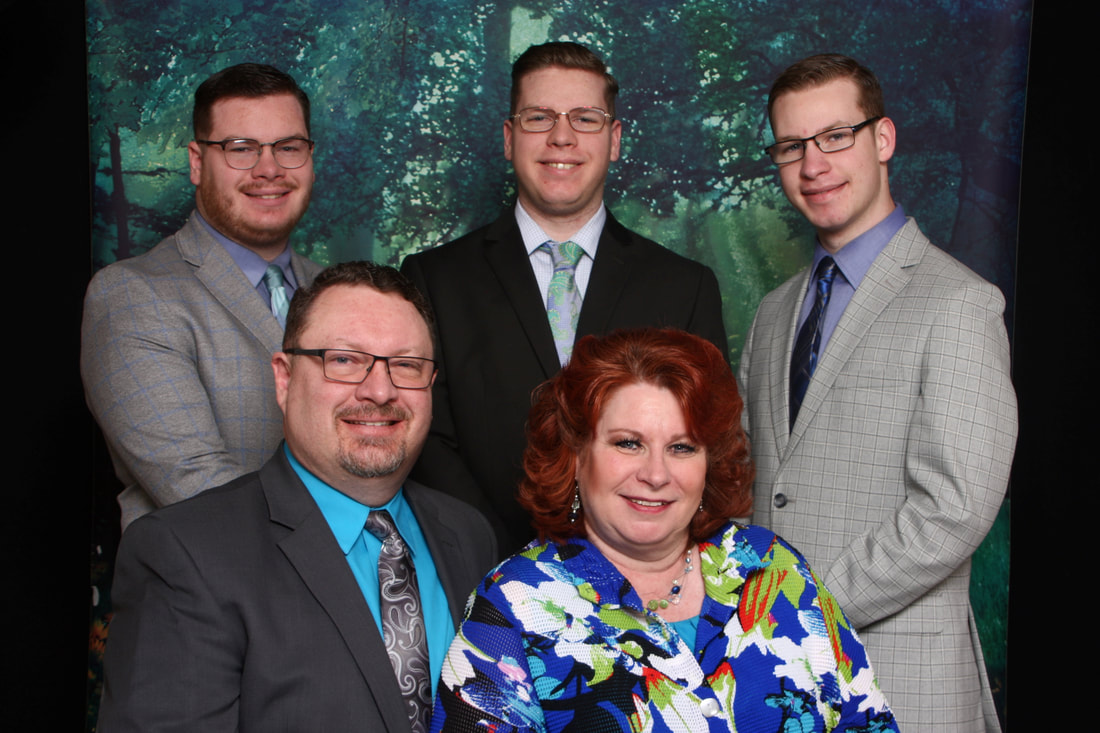 Jerry and Becky Jackson were both raised in Christian homes. Jerry was saved at age 10 (at the end of a Sunday evening church service), and Becky was saved at age 6 (at a youth camp). Shortly after Jerry's salvation, he surrendered his life for full time service to the Lord. During his teen years, he doubted this call and began to search the Scripture to find God’s will for him. The Lord showed Jerry His answer very clearly from Ephesians 3:8 - “Unto me, who am less than the least of all saints, is this grace given, that I should preach among the Gentiles the unsearchable riches of Christ...” Jerry preached my first message at age 14. Since that time he has striven to share the unsearchable riches of Christ with all who will hear. He counts it a privilege to have a part in the Lord's work, no matter what the capacity.

Jerry has been in full time ministry since 1994. During these many years in the ministry, God has allowed Jerry to serve as an Assistant/Associate Pastor, Pastor, and Missionary in Papua New Guinea. One thing that these years of service have taught him is that people have the same need of a living, loving Saviour, no matter their position, race, culture, or location in the world. Another thing that Jerry has learned is that the lost will not come seeking the truth from us; we must seek the lost and endeavour to share the Gospel with them where we find them.

Jerry and Becky Jackson met while Jerry, as a single missionary, was on deputation to go to Papua New Guinea. They were married in 1997. Becky has always been a tremendous blessing to the ministry which the Lord has given to them.

God has given the Jackson's three wonderful boys: James, Jared, and Jason. All three boys come to the Saviour between 2006 and 2007. They are each enrolled in our college-level Bible Institute, with James and Jared scheduled to graduate in June, 2021.  Jason made public his call to preach in January, 2021.  They are a tremendous help to the Jackson's ministry.

We are Old-fashioned, Independent, Unaffiliated Baptists, as reflected in our faith and practice

Bible
I believe that the Bible is to be the sole authority of faith and practice, not only for the church but also for the individual believer, because it is the complete and final revelation of God’s nature and His will for mankind. The Bible not only contains the words of God, but it is the Word of God, from Genesis 1:1 to Revelation 22:21. I use only the King James Bible since I believe it to be the inspired, preserved Word of God for English-speaking people.

God
I believe that there is one, and only one, living and true God, that in the unity of the Godhead there are three persons, the Father, the Son and the Holy Ghost, equal in every divine perfection, and executing distinct but harmonious offices in the great work of redemption.

Jesus Christ
Jesus Christ is God the Son, and the only begotten Son of God. He is eternal, but was physically born of the virgin Mary, and lived without sin. He is God manifest in the flesh, the author and finisher of our faith, and the redeemer of sinful man. I believe in His literal, bodily resurrection and return.

Holy Ghost
I believe that the Holy Spirit is a divine person; equal with God the Father and God the Son and of the same nature; that in His relation to the unbelieving world He restrains the Evil one until God’s purpose is fulfilled; that He convicts of sin, of judgment and of righteousness; that in His relation to the believer He seals, endues, guides, teaches, witnesses, sanctifies and helps the believer.

Creation
I believe in the Genesis account of creation, that all things were created by God in six literal 24-hour days. Man was created in the image of God, without any type of evolutionary activity.

Sin
I believe that man was created in the image of God, and was therefore, sinless. Adam, by personal and knowledgeable choice, sinned. By this sin, all mankind has been born with a sin nature. Sin can either be that of commission or omission. Sin brings suffering and pain into the world, and ends with death, both physical and eternal.

Salvation
I believe that salvation is the work of God alone in the life of a sinner. It is neither obtained nor kept by the work of the individual. Salvation was purchased for all men through the death, burial and resurrection of Christ. It is available to anyone through repentance from sin and faith in the finished work of Jesus Christ, as the sinner is convicted by the Holy Spirit. Salvation makes the individual a justified, sanctified, redeemed child of God. Once saved (born again), the believer can never again be lost.

Baptism
Baptism is the first step of faith for every new believer.  Baptism is reserved for those who have put their faith in Jesus Christ.  It’s method is immersion in water as taught in Scripture and it is the doorway to church membership.  Baptism can only be administered by a true New Testament church.

The Church
A New Testament church is a local body of scripturally baptized believers whose only guide is the Bible and whose only mission is to teach and preach the Gospel of Christ.  The church is neither universal nor invisible in nature. The church was established by Christ during his ministry on earth.  Christ has given authority only to His churches to carry out His evangelistic work and therefore we do not support nor encourage the establishment of ministries that are not directly under the authority of a New Testament church.

The Lord’s Supper
This ordinance of the church consists of unleavened bread and the fruit of the vine (grape juice). This ordinance commemorates the body broken and blood shed by Christ for our sins. The Lord's Supper is scripturally administered by a New Testament church to its own members in good standing.

The Rapture
Jesus will one day return in the air to gather all who have placed their faith in Him as Lord and Savior. This could occur at any time.

The Tribulation and Last Things
A 7-year period of tribulation will commence at the time of the rapture of the saints. The Antichrist will be revealed, and God’s wrath will be poured out upon this world without mixture. At the end of this time, Christ will return to the earth with all His saints, to establish His 1,000 year reign upon the earth. The devil will be released for a short time, but will ultimately be thrown into the lake of fire, along with all who have not believed the Gospel of Christ.

Hell
Hell is a literal place of torment created for the devil and his angels. All who do not believe upon Jesus Christ enter hell immediately upon their death. After the Great White Throne Judgment, all residents of hell will be cast into the Lake of Fire for all eternity.

The Devil
The devil is a real being, created by God in purity and beauty. His pride and ambition caused him to rebel against God with other angels who followed his leadership. He now walks the earth to oppose all the works of God as the prince and power of the air and the god of this world. He is the enemy of God, the accuser of every Christian, the father of lies and all false religion. He will be judged by God, and cast into the lake of fire for all eternity.

Sign Gifts
I believe that the sign gifts (tongues, prophecy, supernatural healing, etc.) ended with the completion of the New Testament writing. As such, the modern charismatic movement is not of God. Instead, it is being used to set the stage for the future one-world church and the Antichrist (2 Thessalonians 2:11-12)
Powered by